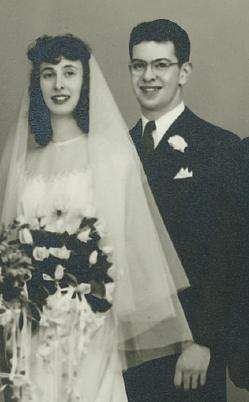 Robert and Catherine Pollard of Roswell GA are being recognized as the “Longest Married Couple” in Georgia, being married almost 72 years.  The couple achieved the recognition based on nominations submitted since last October to Worldwide Marriage Encounter, according to Annie and Roger Borrello, Encounter leaders for Georgia and Tennessee.  Worldwide Marriage Encounter created the project seven years ago to highlight marriage in America and to exemplify for young couples that marriage truly can go the distance.

Nominated by their daughter Anne Johnson, Robert and Catherine grew up in Beloit, WI.  Catherine excelled in sports including softball, tennis and synchronized swimming and was a lifeguard.  Robert loved to play the piano and memorized Rhapsody in Blue.  Robert’s mom found an old piano recital program from grade school and noticed both Robert and Catherine were in it, but they did not know each other at that time.

They met in high school at a church youth group gathering where Catherine came over to sit next to Robert who was playing the piano.  They started dating in high school and enjoyed going to Big Band dances with their high school friends.  Robert was known as Bob and Catherine as Cat, so together they were called BobCat.

Bob graduated from high school in 1942 and enlisted in what was at the time the Army Air Force during WWII.  Catherine graduated in 1943.  By 1943 her class was regularly walking over to the nearby train station to see the men off to war who were being drafted before they could finish high school.

Bob’s military travels took him to training in Oregon, Mississippi, Texas, Alabama and New Jersey.  In 1945 he left for the Pacific on a Navy troop transport ship out of San Francisco.  He was in the Philippines, Australia, Japan and mostly on the Indonesian island of Morotai.  During this time Cat took classes at the University of Wisconsin Madison, and Marquette University in Milwaukee as a journalism major.  She worked for the Milwaukee Journal.  They married in 1946 soon after Bob returned home from the war.

At the age of 93, Bob and Catherine are the parents of five children: Kim Pollard Diaz, Tom Pollard, Pat Pollard, Susan Pollard and Anne Pollard Johnson.  They have four grandchildren and five great grandchildren.  While raising their children they were active in Scouting and numerous church activities.  Cat has been a homemaker, enjoys history and is a member of the DAR.

Bob graduated from University of Wisconsin with a degree in Mechanical Engineering.  His career in engineering and later as a consultant took him to several states primarily in the Midwest and Tennessee over the years.

Currently Bob and Cat attend weekly services as members of St Peter Chanel Catholic Church in Roswell.  They have a very sociable Siamese cat, Christopher IV and reside with their daughter, Anne and her husband, Christopher.  They love to go out to eat and recently enjoyed attending the Nutcracker and Tenderly, The Rosemary Clooney musical.  They like to go to Joe Gransden’s Big Band concerts.  A new hobby, beginning a year ago is listening to audio books.  They read a wide variety of books including biographies on historical figures, musicians, entertainers and books about WWII.  Bob was recently interviewed and videotaped for an Eagle Scout project about his WWII adventures and experiences.

State winners across the country will be presented certificates of achievement and other types of recognition by Worldwide Marriage Encounter couples during Valentine’s week.

Worldwide Marriage Encounter has been offering weekend experiences for 49 years with a presence in almost 100 countries, which the organization says makes it the largest marriage support movement in the world. In North America, WWME programs are presented in English, Spanish, French, and Korean languages.

Weekends this year are conducted in the Atlanta area on the following dates: